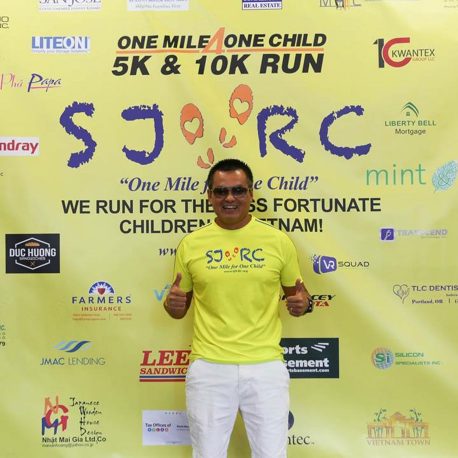 Before June 2015, Luong Le was smoking a pack of cigarettes a day and overweight, but then he discovered running. One year later, Luong had lost 50 pounds and no longer smoked. He credits is new found love of running for saving his life! In the summer of 2016, Luong made a trip to Da Nang, Vietnam to participate in the Da Nang Marathon. On this trip he witnessed the poverty of local orphans living in sub-standard conditions.  It was during that race he was inspired to create the San Jose Vietnamese Running Club (SJVRC) and its charity “One mile 4 one child.” This charity has gone from a fledgling startup to a sustainable charitable organization in less than two years. The charity’s mission is to run for charity while also running for fun. “We now have over 500 members running and raising funds for the Vietnamese orphanages and other local charities.” Said Luong, “I’m honored to lead this unique organization; we are changing the lives of not only the underprivileged in Vietnam, but also the members, making them healthier and more involved in their communities by participating in a variety of charitable acts. Luong’s passion for physical activity has grown and now he is enjoying biking, swimming, and triathlons!